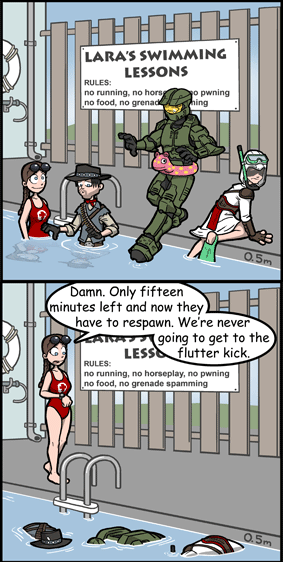 Swimming isn't easy to animate in a video game. First of all there's the complexity of underwater effects. Then there's the freedom of movement in three dimensions, which is neat for the player, but a real pain to achieve in third-person games in terms of achieving an intuitive interface and a fluid camera. Then there's the problem of water meeting land — it's easy enough to have your character jump or fall into water, but to get them out again you'd need ladders, shores, so forth, so you're going to have to do your art direction with that in mind. And to be even slightly realistic you'll need to think about the character's oxygen supplies. Basically, having your character be able to swim means adding an entirely new form of gameplay that's usually boring, annoying and nowhere near worth it.

The most common solution is to have no water, at least nothing more than ankle deep. But since our world is full of the stuff another very popular solution is to declare that the lead character of this game, no matter how athletic, trained and/or super-powered they may be, is just that: Lead. They cannot swim at all, not even enough to thrash around a bit. They just sink like a stone or are helplessly swept away by strong currents and are gone forever. It gives a new meaning to Hazardous Water.

In some extreme cases, characters will drown in water that is visibly too shallow for anyone to drown in, coming up to their waist or even lower. In which case you may see them suddenly explode, thrash around while clearly being able to touch the floor if they tried, or just fall off the screen.

Some games have decided that it is worth it, and thus attempt more realistic solutions, with varying degrees of effectiveness. Quake, an early example, would deal damage to your health if you were underwater too long. However, armor protects against this damage — meaning you can stay underwater longer if you wear full body armor. Earlier still, the Ultima Underworld or The Elder Scrolls: Arena games didn't let you go underwater — swimming was essentially the same as walking except you bobbed up and down more and couldn't use a weapon, but after some amount of time your health would start taking a battering. The Tomb Raider games and the later The Elder Scrolls have Oxygen Meters that would deplete as you swam, with running out causing lots of damage to be dealt, resulting in swift death. Other techniques have also been used to increase realism and decrease the prevalence of this trope.

Another solution is to put the main character in an environment suit, like in Halo. Which doesn't explain why the apparently perfectly ordinary land vehicles don't suffer from hydrolock when submerged. Even then, some bodies of water may still act as Bottomless Pits.

Even when the Player Character can swim, NPCs often still instantly drown, to avoid having to code swimming AI.

note that this trope exists to avoid a few other tropes, such as Insurmountable Waist-Height Fence or Border Patrol as water is a more "logical" method than a fence or invisible wall. Additionally it removes the need for extra assets taking up inventory slots that don't get used a lot. Sometimes, an item that allows one to swim will be presented — usually to keep the player from going places they shouldn't be able to yet.

Important: If your drowning skills come with an Oxygen Meter, they're not Super.

Contrast Super Not-Drowning Skills for characters who can stay underwater indefinitely with no apparent means of breathing, as well as Super Swimming Skills for those with more realistic submersion behavior but unrealistic swimming abilities.

Being unable to swim, Weasel starts sinking once he hits water and is seemingly the first to die in the film.

Being unable to swim, Weasel starts sinking once he hits water and is seemingly the first to die in the film.