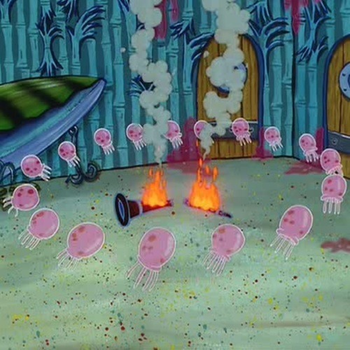 "Hey, if we're underwater, how can there be a—" (psssh)
I was driving in downtown Atlantis
My barracuda was in the shop
So I was in a rented stingray
and it was overheating
— Kip Addotta, "Wet Dream"
Advertisement:

Living underwater sounds like it would be so cool, doesn't it? In fiction, it isn't really that big a deal, because life at the bottom of the ocean is conducted impossibly similarly to life on land. Whether your characters are mermaids, Fish People, or talking, sapient fish and other sea creatures, you'll find that their underwater lifestyles have a lot in common with humans' above-land lifestyle. Most Writers Are Human, after all, and they give the viewers or readers a portrayal they are familiar with.

Examples of this type of Creator Provincialism include:

The problems with viewers being able to understand the characters can sometimes be handwaved with Direct Line to the Author.

In addition, the setting for underwater fantasy is almost always "under the sea," not "under Lake Michigan" or "under the Amazon River" presumably because it sounds more romantic, even though salt water would introduce yet a few more challenges, such as 'things would rust at really fast rates' and 'having a salty taste constantly in your mouth would probably get annoying faster than permanently wrinkled skin and burning eyes'.

In short, replacing air with water requires far more changes to the human anatomy than simply replacing legs with a fishtail and far more research about the laws of physics and biology than most writers bother to do. Fortunately, as mentioned above, the concept is saved by the Rule of Cool and by Acceptable Breaks from Reality. Nobody is going to watch an ocean movie, only to strain their eyes and ears to see or hear anything taking place.

Compare Water Is Dry, Space Is an Ocean, Sand Is Water, Atlantis Is Boring, and Walk, Don't Swim.

Contrast The Sky Is an Ocean.

Not to be confused with Super Not-Drowning Skills, when characters are given an unexplained ability to survive underwater for an infinite time.

If we're underwater, how can there be a fire?

If we're underwater, how can there be a fire?