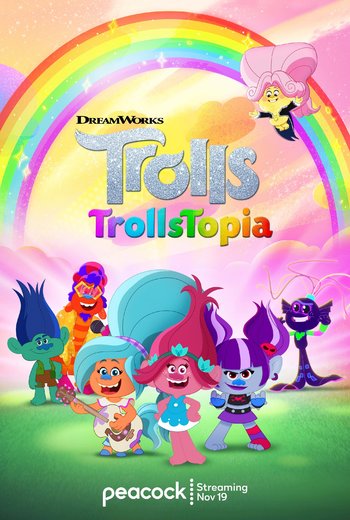 Trolls: TrollsTopia is a TV series produced by DreamWorks Animation and Atomic Cartoons that started airing in November 19, 2020 on Hulu and Peacock. It's a follow-up series to the movie Trolls: World Tour detailing the fallout of its plot, in similar vein of its predecessor Trolls: The Beat Goes On!, which followed the first Trolls movie. In the series, "TrollsTopia" is the name given to a project conducted by the Pop Troll Queen Poppy to bring trolls from each tribe together and live in harmony as they exchange culture and music.

Alongside the show, two adjacent promotional web series have also aired, titled What They Got Right (premiered in 2020 and ended in 2021) and Trolls Scrapbook Stories (premiered in 2021 and currently ongoing).

Chaz uses a magic flute to mind control the trolls into resorting their lives to smooth jazz,

Chaz uses a magic flute to mind control the trolls into resorting their lives to smooth jazz,