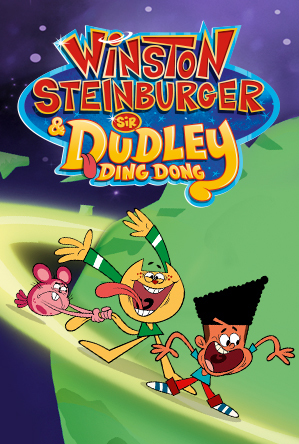 Winston Steinburger and Sir Dudley Ding Dong is an Australian-Canadian animated show originally made for Teletoon and ABC Me. Created by Mike Geiger, the series was produced by Canada's Entertainment One and Australia's Sticky Pictures (with Atomic Cartoons providing the animation).

The series stars an adventurous 12-year-old boy named Winston Steinburger, a dimwitted anthropomorphic cat named Sir Dudley Ding Dong, and a sarcastic mouse-like alien named Hampton. The trio live in the faraway Globulus Galaxy, where they work at a space diner run by an alien named Cutty. When not on the job, the three explore the galaxy together with a homemade space cruiser and encounter all manner of galactic thrills and danger, such as their hero, the space cop Sgt. Sasha Spritz, or their archenemy, the pint-sized galactic supervillain Pam the Destroyer (who also happens to have a gigantic crush on Winston, much to his dismay).

The series debuted in 2016 on ABC Me and later came to Teletoon in 2017. It ran for 26 episodes over a single season.

Tropes asocciated with this cartoon: