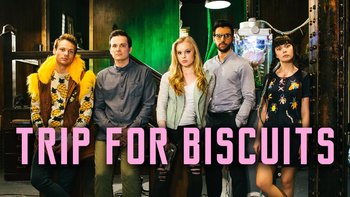 "When I was young, my parents went missing under mysterious circumstances. We were at the playground one day when my parents abandoned me, by running away in a burrito food truck. I spent every waking moment trying to figure out where my parents went, and got into a bit of trouble when I hacked into military surveillance satellites. I went to juvie for a year. After years of studying advanced science, and spending years looking for my parents, I finally ran out of leads. I'm desperate, and ready to try more unconverntional methods. And that's how I was lead to you. I'm at the end of my tether, and I really need some help. Were you not listening to me?
— Bajo explaining the basic premise of the story in Fight!
Advertisement:

Bajo's parents were abducted in a Mexican fast food truck, so he tries to hire SEPI note Spacial and Extraterrestrial Phenomena Investigations to hunt them down. However, since he's broke, and the SEPI team are short a man, they instead hire him, and allow him to use company resources to find his parents...just outside of work hours, and he can't use any staff (not that that stops him using Violet or Amy). Plus he's not getting paid.

The series was first broadcast on ABC iView on March 3rd, 2017, before airing on ABC Me on March 20.

Trip for Biscuits contains examples of the following tropes: