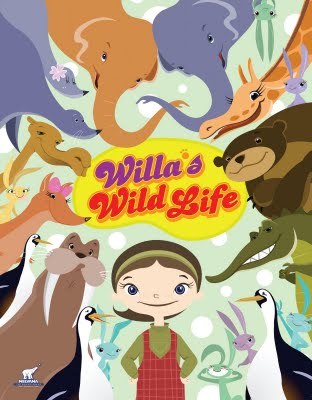 What would you do if you had your own zoo?
Would you bounce on a bear?
Let a giraffe brush your hair?
Have an elephant pick out your underwear?
Advertisement:

Willa's Wild Life is a Canadian/French animated television series from Nelvana and Futurikon produced in association with the Canadian network YTV and and the French network Télétoon (no relation to YTV's at-the-time rival). The show is created by American children's author Dan Yaccarino (who also created Oswald) and loosely based on a book he wrote called An Octopus Followed Me Home.

The series follows a 9-year-old girl named Willa (voiced by Canadian actress Jordan Todosey of Life with Derek and Degrassi fame) who has some very unusual pets. She has, so far, acquired a giraffe, two elephants, an alligator, a walrus, a bear, two seals, a camel, three penguins, and lots and lots of rabbits. Willa often finds herself in hilarious situations, and these colorful creatures offer Willa advice and wisdom from each of their respective points of view.

The series celebrates the concept of multiple intelligences that embraces the notion that every one of us contains a host of different modes and types of intelligence, including musical, spatial and logical. The show's motto is, "It's not how smart you are; it's how you are smart."

The show ran for a single season of 26 episodes from 2008 to 2009. It also aired on Qubo in the United States. For the Qubo airings, special segments were added at the end of episodes where Willa will narrate the life lessons of what to do, what not to do, and how important the subject is, relating it to what happened in the episode.