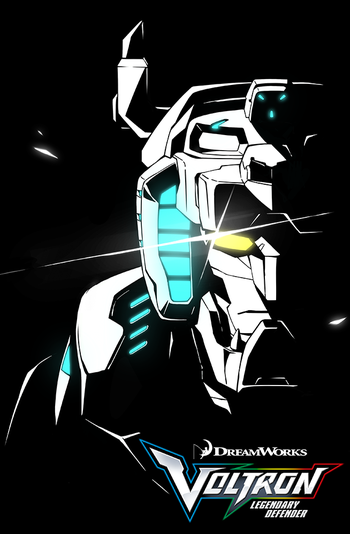 "Defenders of the Universe," huh? That's got a nice ring to it.
Allura: You five were brought here for a reason. Together, you will form Voltron, the greatest weapon ever known, protector of the innocent, and our only hope to save the universe.
Hunk: Geez, no pressure.
Advertisement:

Voltron: Legendary Defender is the newest Voltron series since Voltron Force was cut short in 2012. Unlike that show, however, Legendary Defender reboots the concept and gives it a nice clean slate to tell the tale anew. It is also the first Voltron series to be produced after the franchise was bought by DreamWorks Animation, among other titles. The show is produced by Lauren Montgomery and Joaquim Dos Santos, best known for their work on Avatar: The Last Airbender and The Legend of Korra and animated by Studio Mir (also known for its work on Korra).

Far into the future, humanity's fledgling space travels are run by the Galaxy Garrison, which is shaken when one of its most talented members, Shiro (Josh Keaton), lands back on earth after going missing on a mission a year prior. Shiro and four other pilots — cadets Lance (Jeremy Shada), Pidge (Bex Taylor-Klaus), and Hunk (Tyler Labine), as well as dropout Keith (Steven Yeun), chance upon a giant robotic Blue Lion in the desert. They are transported to the mysterious Castle of Lions, where the alien Princess Allura (Kimberly Brooks) of Altea has been in cryosleep for 10,000 years. Allura names the five Paladins of the legendary warrior Voltron in hopes that they can defeat the nefarious Galra Empire, who have been conquering the various galaxies for millennia, and restore peace to the universe. But first, they'll have to rebuild Voltron, figure out how to pilot their individual Lions, learn to work as a team, build alliances with colorful alien races, and maybe grow up along the way.

The series is streamed on Netflix, with 78 episodes altogether, produced as three production blocks of 26 episodes each, released in eight variable-length seasons. The series premiered on June 10, 2016 and its eighth and final season premiered on December 14, 2018.

Note that spoilers from Seasons 1-4 are unmarked.

The five Lions form these tropes:

While not said out loud, Allura & Coran have this reaction, when they learn where Milkshakes come from.

While not said out loud, Allura & Coran have this reaction, when they learn where Milkshakes come from.