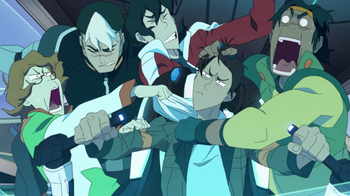 They are the universe’s only hope.
Advertisement:

Considering the show creators' past work, it's fair to say even this one will have these moments abound.

Warning: Per wiki policy, Spoilers Off applies to Funny Moments page. All spoilers will be unmarked.

The Rise of Voltron
Some Assembly Required
Return of the Gladiator
Fall of the Castle of Lions
Advertisement:
Tears of the Balmera
Taking Flight
Return to the Balmera
Rebirth
Crystal Venom
Collection and Extraction
The Black Paladin