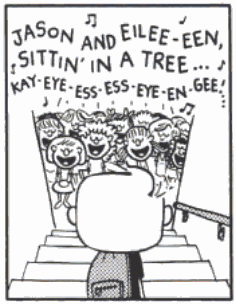 Alice and Bob are in the same class in their prep school. Alice has recently moved chairs to be closer to Bob—and Carol has figured it out. While on break, Carol asks Alice, "You fancy Bob then?" Alice denies it.
Advertisement:

"Yes you do!", Carol replies, then goes into the following popular ditty.

Alice and Bob, sitting in a tree
K-I-S-S-I-N-G,
First comes love
Second comes marriage
Then comes a baby in a baby carriage!

Rather common with the Toy Ship, but can occur elsewhere. Basically, it's Carol teasing Alice and Bob for their crush or relationship.

There are many variations of the song, with several extra verses. If it occurs with adults, the dialogue is usually more "explicit". Compare Mocking Sing-Song.

Coiny goes the extra mile to form letters with his body while singing the song!

Coiny goes the extra mile to form letters with his body while singing the song!