The Hunter Becomes the Hunted 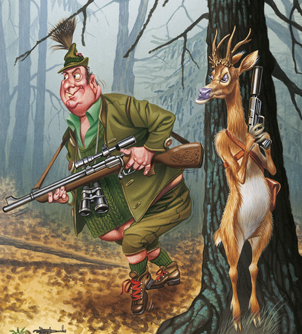 The hunter is usually the one pursuing the prey, be it a literal example of one hunting animals or the villain relentlessly hunting his victim in a sporting example of Hunting the Most Dangerous Game. But in some cases, the hunted gains resolve or the upper hand and turns the tables on his pursuer, turning the hunter into the hunted.

Once the victim pulls this off, the hunter's game falls apart, and he will be forced to recognize his victim as an actual threat to him. The turnaround embodied in this trope usually signifies that the hero will soon defeat the villains and put an end to his twisted game.

This trope has roots as far back as Greek Mythology, where a quite literal hunter, Actaeon, is transformed into a deer by Artemis after a case of Outdoor Bath Peeping and eventually torn apart by his own dogs.

The Hunter of Monsters lives by this trope, since by default monsters are portrayed as predators of human beings, and human beings tend not to like being prey.

Adventure stories and thrillers frequently invert the trope, telling the story from the point of view of the hunted one who becomes the hunter. This is especially the case in stories where the hunter is not a single person, but a conspiracy; here the intended prey has to solve the mystery of who is attacking them and why, and then find out who belongs to the conspiracy and whom they can trust as allies to help bring it down.

Sub-trope of Russian Reversal. See also Egomaniac Hunter, Evil Poacher, Hunter of His Own Kind, Hunting the Most Dangerous Game, and Serial-Killer Killer. Not to be confused with The Killer Becomes the Killed.