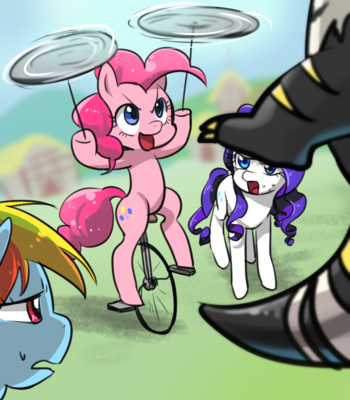 There are other ways to fight a bugbear...
but Pinkie's is certainly the most fun.

"That's the problem. He's a brilliant lunatic, and you can't tell which way he'll jump. Like his game, he's impossible to analyze — you can't predict him, dissect him... which of course means he's not a lunatic at all."
— Anatoly Sergievsky, Chess
Advertisement:

Some fighters have speed, some have strength. Proponents of Confusion Fu have unpredictability.

Their attacks and motions are random (or seem to be), making them difficult to read and predict. Perhaps their priorities and motivations are so different from your own that attempting to guess their next move doesn't work, or perhaps their bodies are structured in such an unfamiliar way that you do not recognize the movements that foretell a particular action.

They are the natural nemesis of those blessed with Awesomeness by Analysis. Stylish Confusion Fu fighters sometimes double as Dance Battlers. This style is often used by Bunny Ears Lawyers characters who have Success Through Insanity. And on larger scale, if moral standards of the fighting factions are mutually incomprehensible, everything can suddenly become a confusion fu styled stratagem.

In gaming, most of these characters tend to be Jack-of-All-Stats characters, as their versatility makes them very unpredictable. Or it is Random Number God who makes the game unpredictable for both sides.

Sister trope to Spanner in the Works, in a general sense. The reason why something Crazy Enough to Work might actually work. Refuge in Audacity is a favorite tactic. See also Drunken Master and Drunken Boxing, and for a more complicated version, the Kansas City Shuffle which relies on giving the victim false assurance that they can predict your moves. Compare Improv Fu. Contrast Strategy, Schmategy, where the randomness is unintentional. Not to be confused with What the Fu Are You Doing?, where the fighting style doesn't work because the fighter is incompetent at it.