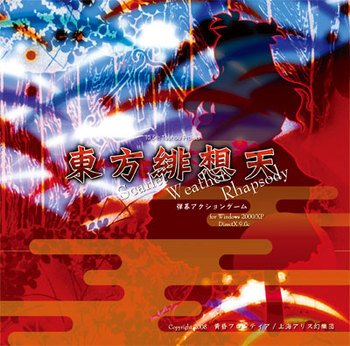 Red and ready for a rematch.
Advertisement:

About a year after the events of Mountain of Faith, Gensokyo starts experiencing bizarre weather patterns, prompting a number of humans and youkai to investigate. Considering it strange but harmless, Reimu does not... until the Hakurei Shrine is flattened by a localised earthquake, and she sets out to give the culprit a piece of her mind.

Built on a modified version of the Touhou Suimusou ~ Immaterial and Missing Power engine, SWR is a Mascot Fighter like its predecessor, using most of the same sprites but with overhauled gameplay. Gone are the Multiple Life Bars, Spell Card declarations and item pickups, replaced by a new deck system and weather conditions. This game would later receive a followup in Touhou Hisoutensoku, an Expansion Pack which can also be played as a short standalone game.