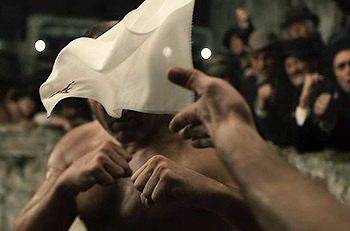 An occurrence where a character uses a piece of stray cloth as a weapon. The cloth used can vary from blankets to bags with towels getting special mention, as they're a convenient illustration of Can't Bathe Without a Weapon. The cloth can be used in a number of ways. In the most benign uses, the cloth can be used to capture or blind an enemy. More agile characters may even use the cloth to capture a weapon and disarm their opponent. More sinister characters can use the cloth as a makeshift garrote or even a hangman's noose. More straightforwardly, sufficiently strong cloth could be used as a whip. A type of fighting style that is not seen often, but does show up in some movies or TV shows.

Overlaps with either Improvised Weapon or Improbable Weapon User.

A Sister Trope to Clothing Combat. The Master of Threads, who manipulates cloth or fabric as a superpower, is a few steps up from this.