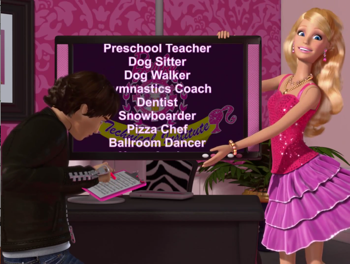 Barbie, the only person in the world with 126 careers... and counting.

"Jack-of-all-trades, Master of None,
often better than a master of one."
— Traditional saying
Advertisement:

Specialization is a common trend in fiction. It allows the author to create an ensemble cast where every member of a team provides a specific function, and avoids role duplication. This character says "specialization is for insects!"

Perhaps a character is a loner, and needs to be able to do everything on his own. Perhaps everyone else is so useless, he had to take over their jobs as well as his own. Perhaps he just has a wide variety of interests. May be a sign of a person with a checkered past, who has had to take on a lot of roles in his life, just to get by. Whatever the reason, this character has at least some skill in a wide variety of disciplines.

Sometimes The Leader of a team may be a Jack-Of-All-Trades, with a good, basic grasp of the specialized skills possessed by the members of his team, allowing him to understand how to use each team member to their fullest potential.

From an analysis standpoint it could be argued that being good at everything is a form of specialization. While a jack-of-all character might not stand out, they are usually well equipped to handle most situations and most opponents. It's their well-rounded nature that makes them so versatile allowing them to deal with almost anything or sub in for anyone at the last second. What if the opponent is really strong but not very fast? The jack of all can out pace them while being strong enough to do damage. What if the opponent is faster? Usually the jack-of-all is fast enough to defend against if not avoid their opponent's attacks and deal out more punishment in a war of attrition.

Supertrope of Renaissance Man (where someone is exceptionally good at many things) and Master of None (where someone does poorly at a lot of things). A related trope found in Video Games and Tabletop Games is the Jack-of-All-Stats, who has well-balanced stats, not skills. See also The Red Mage, Renaissance Man and Power Copying. Do-Anything Robot may be a justification for this. Compare the Master of All, who is the best (or among the best) in practically everything. Contrast Min-Maxing, Tactical Rock–Paper–Scissors, Elemental Rock–Paper–Scissors, Crippling Overspecialization, Sacrificed Basic Skill for Awesome Training. For similar tropes related to specific fields, see Omnidisciplinary Lawyer, Do-Anything Soldier, and Omnidisciplinary Scientist.

Alternative Title(s): Jacks Of All Trades