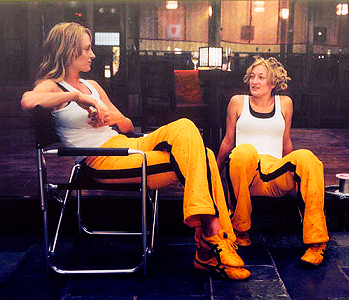 Actress Uma Thurman and stunt double Zoë Bell hanging out.
"You idiots! These are not them! You've captured their stunt doubles!"
— Captain of the Guard, Spaceballs
Advertisement:

When you want to film a dangerous stunt without risking your leads, you call in these people. You dress them up as the characters, give them a wig, and try to avoid having their face on camera.

There are also non-stunt doubles — for instance, the anonymous girl who played the back of Patty Duke's head in The Patty Duke Show whenever the cousins needed to be in the same shot together. Non-stunt doubles are usually called stand-ins or body doubles, and are also used to block and light scenes when the main actors are busy elsewhere. The Talent Double appears in instances where the required action is simply too difficult for the actor: complicated ice-skating or dancing, for instance.

This is actually a lot more common than most would expect; though many films have actors appear to engage in highly athletic yet low-risk tasks - lifting and carrying moderately heavy objects, running for more than a few seconds, jumping over small obstacles, climbing fences, ladders and stairs - anyone who actually thinks about doing such things themselves will realize that all but the most athletic would tire very, very quickly, yet actors only appear strained, exhausted, or even out-of-breath when it would be dramatic. Such scenes are in many cases the bulk of a stuntman's work - especially on repeated takes.

Traditionally, female actors were often doubled by small male stunt artists, due to no woman with the required skills being available, or the stunts being considered "too dangerous" for a woman. This still happens on occasion, but the increasing number of female stunt artists makes it much rarer than in the past.

Nowadays it's common for stunt doubles' faces to be replaced with the stars' faces in post production. An early example is Event Horizon: they didn't realise until they sat down to edit the film that Laurence Fishburne's stunt double's face was showing clearly for a couple of seconds in the finale (in his defense, he was on fire). So, the star's face was crudely but effectively pasted over the double's. An earlier example of the same occurs in Jurassic Park. This has opened the door to more flexible use of stuntmen.

The inverse of this is, of course, No Stunt Double.