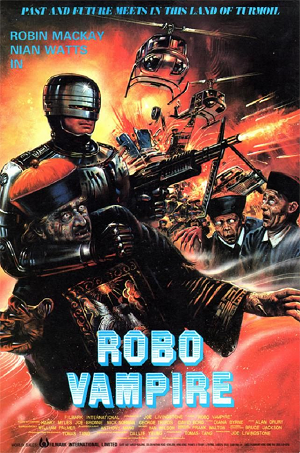 Robo Vampire is a low-budget action movie. Actually, it is the remains of two different low budget movies cobbled together and passed off as a film.

A Taoist priest and his army of jiangshi are hired by a drug lord to protect his smuggling operation from a group of commandos. Soon the priest awakens a powerful Vampire Beast to aid him in his new business venture. However a ghost appears and berates the priest for his actions. Apparently she and the Vampire Beast had loved each other when they were still alive but were forbidden from marrying each other. To solve this they commited suicide so they could be together in death. As a compromise the priest marries the two on the condition they would still serve him. Unable to deal with this new threat the commandos rebuild one of their fallen comrades into a cyborg known as RoboWarrior. Meanwhile, a female drug agent is kidnapped and must be rescued from deep within the jungle by a team of commandos.

This film is known among connoisseurs of bad films for its poor editing, terrible special effects, broken dubbing and total lack of coherency. You can also check out Obscurus Lupa's review here.

Or you could just watch the entire film right here.

This film provides eaxmples of: