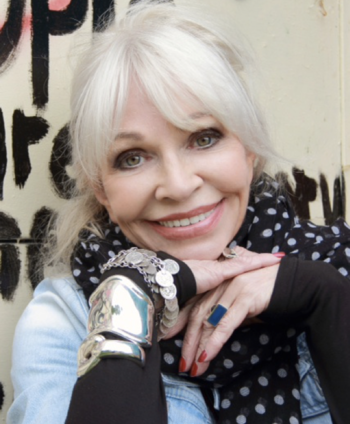 "I lose things all the time. I once left my mother's ashes at a bus stop."
"The little kiddies really got me. Older men found it quite pleasant to look at me. The mothers and girls didn’t feel threatened and loved Jo’s trendy clothes and rings."
On playing Jo Grant in Doctor Who
Advertisement:

Catherine Ann "Katy" Manning (born 14 October 1946 in Guildford, England) is an English actress best known for her part as the companion Jo Grant in Doctor Who. She also plays Time Lady Iris Wildthyme in Big Finish Doctor Who — and yes, the two characters have teamed up.

She's officially an Australian citizen, although she lives in London.

Tropes related to her career include: