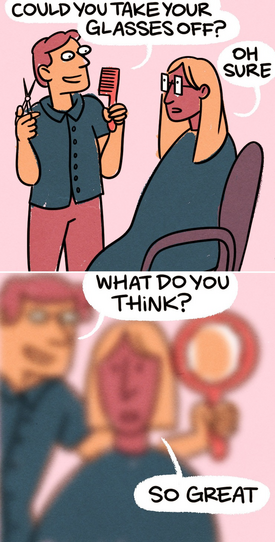 for Buzzfeed.
"My glasses! I can't see a thing without my glasses!"
— Velma from Scooby-Doo, pretty much Once per Episode
Advertisement:

Nobody who wears glasses in TV ever needs them for minor vision correction, except for reading glasses that are worn mainly to make the character look wise. Almost all TV characters with glasses have such bad vision that if they are deprived of their spectacles, they are practically blind — usually hammered home by showing (briefly) the character's uselessly blurry point of view or the character making a Blind Mistake.

In animation, when such a character's glasses are lost, their eyes usually shrink down to pinpoints, which indicates either that they are squinting to see, or to point out the jarring real life effect of seeing someone who has huge eyes when seen through heavily magnified glasses without their glasses. An anime variation on this is usually represented with the character's eyes being replaced by 3's or 3_3, which is another stylization of squinting.

Oddly, when a character discards his/her glasses in order to look more attractive or more badass, that character invariably turns out not to be blind without 'em after all (unless it's a parody). Sometimes both will occur, with the character's eyesight varying based on what's convenient for the situation.

This is a Super-Trope to Blind Mistake and Dropped Glasses.

Note: because special lenses are needed to keep eyeglasses from flashing stage lights, and reflecting filming equipment, any time an actor wears glasses, it's a character choice, and the glasses are special stage glasses, which the actor may or may not need. If an actor needs corrective lenses, and it's deemed wrong for the character, the actor has to do without, or wear contacts.

Truth in Television, but with wildly varied degrees of hilarity, if any.

Unrelated to the various tropes on the Index Myopia, which are about figurative forms of myopia. Contrast Mistaken for Bad Vision.

We can't show the full clip due to space limitations, but throughout this segment, Miss Whoops turns a simple flight into a nightmare after losing her glasses.

Alternative Title(s): Blind Without Them

We can't show the full clip due to space limitations, but throughout this segment, Miss Whoops turns a simple flight into a nightmare after losing her glasses.