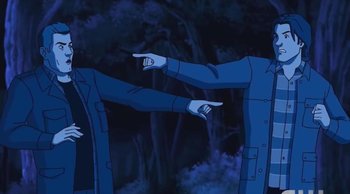 "Gah! You're a cartoon! I'm a cartoon!"
Sam: If that guy can die for real in this cartoon...that means we can, too.
Dean: It doesn't matter if we die. Scooby-Doo could die! And that's not happening, not on my watch! I'd take a bullet for that dog.

A cursed TV sucks Dean and Sam into a cartoon world. They soon find themselves monster-hunting with...SCOOBY-DOO.