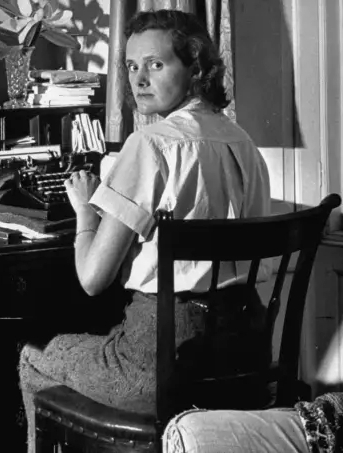 Dame Daphne du Maurier, Lady Browning, DBE (13 May 1907 – 19 April 1989) was an English author and playwright. The daughter of two actors - Sir Gerald du Maurier and Muriel Beaumont - she was born in London but spent much of her life in Cornwall, where most of her works are set.

Although she's usually classed as a romantic novelist, her stories are actually almost Gothic, with overtones of the paranormal. Her works were bestsellers but weren't taken seriously by critics at first, although she's since earned an enduring reputation for narrative craft. Many of her novels and short stories have been successfully adapted into films, including three by Alfred Hitchcock.

Daphne was married to the British Army officer Frederick Browning, who commanded the Airborne Division at Arnhem

. They actually met when he was visiting Cornwall on holiday, having been inspired to go there after reading her first novel, The Loving Spirit. After their marriage, Daphne continued to write under her maiden name. In later life she became somewhat reclusive, to the point of not telling anyone that she'd been made a Dame in 1969 (her children only found out about it from the newspapers) and trying to get out of going to the ceremony. That said, she was very vocal about the negative portrayal of her husband in the war film A Bridge Too Far, and appeared as a castaway on Desert Island Discs in 1977 (her chosen book being the collected works of Jane Austen).

Works by Daphne du Maurier include...