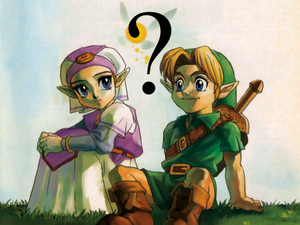 Who knows?
Ronnie Anne Santiago. Spunky and independent spirit who loves skating, games, and pranks. Has a crush on Lincoln?
— Ace Savvy on the Case

Our hero certainly spends a lot of time rescuing that princess, so he must really care about her. And it's a safe bet that she really cares about him, so it's only natural to assume they're more than Just Friends, right? But wait… had anyone actually said that the two of them are together, or are you just assuming? Is the character denying the truth or stating it when he says "She Is Not My Girlfriend"? Is it Not What It Looks Like — or is it? We could ask questions all day.

The Implied Love Interest is when one character fills the role of a Love Interest to another character in the narrative, or otherwise has a lot of tropes related to being a Love Interest surrounding them, but nothing explicit in the narrative or from the creators is ever stated on the matter. One reason for this trope is in a serial work, it allows the author to gently cover their bums when it comes to either Ship Sinking ("Hey, the ship never set sail in the first place") or Cleaning Up Romantic Loose Ends ("The potential was there from the start"). The writer may state that they Hooked Up Afterwards, or leave it to the reader's imagination. Expect there to be at least some fans who pair the couple up regardless.

A variation of this trope, known as Developers' Desired Date, also happens a lot in video games where the player has more than one possible love interest. One character will often be the "preferred" option, with the most work gone into their romantic "route," hints nudging the player in their direction early on (such as being the first one the player runs into), or just the easiest to connect with unless the player deliberately chooses to go with another choice.

Naturally, this goes hand-in-hand — though whether palms cupped or fingers laced, we couldn't tell you — with Ship Tease. If the relationship is left ambiguous because the characters are of the same sex, it's either Hide Your Lesbians, or Homoerotic Subtext. Or, if the "couple" in question are close relatives, it's Incest Subtext.

Compare with The Not-Love Interest, which is similar, but the romantic implications do not actually exist.