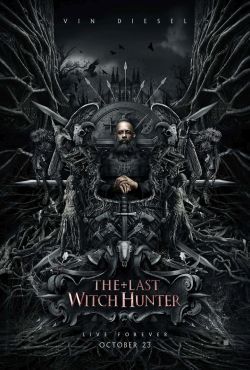 The Last Witch Hunter is a 2015 fantasy action film. It stars Vin Diesel as the main character, accompanied by Rose Leslie, Michael Caine, and Elijah Wood as his sidekicks.

Unknowingly, mankind shares Earth with witches, descendants of an ancient race gifted with powerful magic. Eight hundred years ago, one of them, the Witch Queen, decided to end this coexistence and exterminate mankind via a deadly disease — the Black Death. While witch hunter Kaulder (Diesel) defeated her and stopped her from spreading her plague across humanity, before her death the Queen cursed Kaulder with immortality, forcing him to never find peace from the death of his wife and child.

In the present day, Kaulder's an agent of Axe and Cross, an organization making sure that the witches will never pose the same threat the Queen did. An investigation into the death of his Secret-Keeper (Caine) leads him to discover that a new evil threatens to bring the Witch Queen back, forcing Kaulder to join forces with the young witch Chloe (Leslie) to try and stop it.