"Pan Up to the Sky" Ending 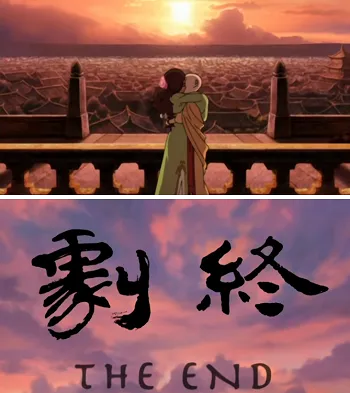 "If you don't know what to do next, slowly pan the camera and shoot the sky..."
— Kyon, Haruhi Suzumiya, "The Adventures of Mikuru Asahina: Episode 00"
Advertisement:

A camera trick used at the end of an episode or movie, wherein the view pans up to the sky upon conclusion of a story arc. The characters usually look up along with the viewer, too, or are implied to.

The sky is a powerful symbol in itself. Here are just a few uses:

Compare Grasp the Sun, Flyaway Shot and Fly-at-the-Camera Ending. Contrast Ending by Ascending, when a character does this instead of the camera, and "Pan from the Sky" Beginning.

Has nothing to do with holding a frying pan in the air.

Finished with a sky shot.

Finished with a sky shot.