Anime / The Girl Who Leapt Through Time 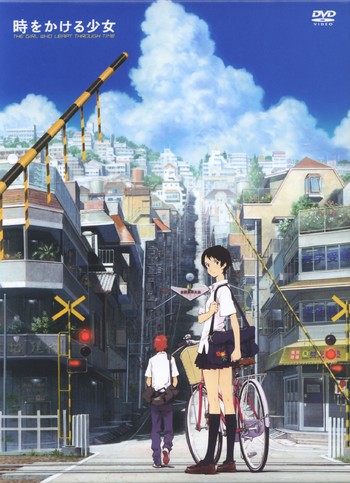 It's all about choices.
"Time waits for no one."
Advertisement:

The Girl Who Leapt Through Time award-winning 2006 animated Japanese film directed by Mamoru Hosoda, produced by the animation studio Madhouse and distributed through Kadokawa Herald Pictures. It is a sequel to a very popular 1966 novel by Yasutaka Tsutsui (previously adapted into three live-action films (1983, 1997, and 2010), a 5 episode TV series (1994), a 2002 TV film and a 2004 manga title (A Girl Who Cut Through Time), none of which received wide distribution in the west).

Poor Makoto Konno (Riisa Naka). She's officially having her worst day ever! It's not enough that she overslept and barely made it into school on time, she also flunked a math quiz, got flattened by two rambunctious boys at lunchtime, accidentally set the home economics room on fire, and then had this really weird accident while cleaning the science lab. Then to top it all off, she just had to crash her bike into this really crabby lady on her way home...and that wasn't until after she'd already been hit and killed by the train!

With a little experimentation, Makoto discovers from her aunt Kazuko Yoshiyama (Sachie Hara) that she has somehow developed the ability to leap backwards in time, allowing her to re-do events whenever she likes, from preventing her little sister Miyuki (Yuki Sekido) from eating her favorite snack to re-living a karaoke session ten times in a row. But the more changes Makoto makes, the more she begins to realize the effect her time-leaping is having on other people - especially her relationships with her best friends Kousuke Tsuda (Mitsutaka Itakura) and Chiaki Mamiya (Takuya Ishida). And the source of her ability might not be as limitless as she first assumed...

No relation to The Girl Who Leapt Through Space (Sora o Kakeru Shoujo), whose title was inspired by and a reference to this work. Or to the first episode of Inuyasha.

The Girl Who Leapt Through Time

Makoto Konno crying on the rooftop.

The Girl Who Leapt Through Time

Makoto Konno crying on the rooftop.