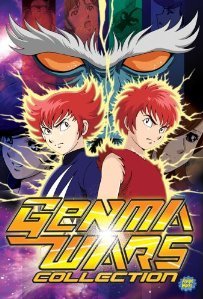 The cover to the DVD box set
Advertisement:

Genma Wars (幻魔大戦 Genma Taisen) is a science fiction manga and novel franchise that began in 1967. It was a collaboration in Shonen Sunday by science fiction writer Kazumasa Hirai (of 8th Man fame) and Shotaro Ishinomori. However, this article only covers Genma Wars: Eve of Mythology Chapter (幻魔大戦 神話前夜の章 Genma Taisen: Shinwa Zen'ya no Shō) which has been released in the US under the name "Genma Wars" by Media Blasters on DVD.

It is the second anime entry in the franchise; the first being the 1983 movie dubbed as 'Harmagedon' in English directed by Rintaro and animated by Madhouse; unlike the Harmagedon movie, which adapted the original manga, the series adapts the Genma Wars: Eve of Mythology Chapter manga by Ishinomori published in Tokuma Shoten from May 1979 to November 1981. It ran for four volumes and was Ishinomori's last work in the franchise.

Genma Wars is set in a post-apocalyptic world, where mankind has been subjugated by a demonical tribe known as Genma. The humans are reduced to little more than slaves for the Genma, who employ mutant armies of cyclopses, vampires, werewolves, highly intelligent simian soldiers, and other mythological beings, to keep the humans at bay. The authoritarian Genma leader, The Maoh King, desires to have an heir with immense, extraordinary power. He orders his men around the kingdom to abduct Hito women, who possess latent powers. The Maoh King is convinced that if he conceives a child with a Hito woman the child will possess amazing powers.

In one case, in exchange for the safety of her village, a Hito girl called Non submits to the Maoh King, and gives birth to male twins, Loof and Gin. Loof is taken to grow up among the Genma, while Gin grows up under his mother' care, however she is labelled as a whore by her fellow kinsmen. Eventually, Loof and Gin encounter each other and plan revenge against their hated father. However, their father reveals he only created them, and the whole hybrid Human-Genma, to bring the war across the Earth, out of boredom. He throws his sons in a time portal, back to the present time, when the war was initiated, in order to stop their dystopic world.