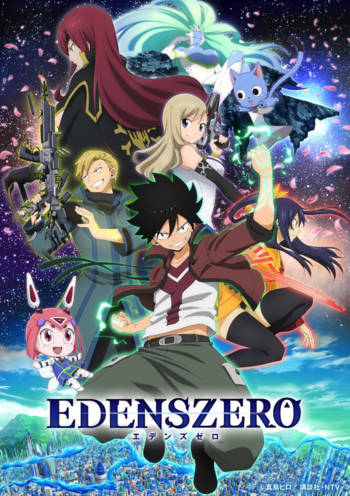 Now, your adventure has begun. Let your own feet carry you forward.
"The boy has begun his journey. What will he bring upon our universe? Will he become a hero of legend? Or will he wreak insurmountable havoc as a demon king?"
— Mother
Advertisement:

Shiki Granbell has spent most of his days Raised by Robots in an abandoned theme park on a forgotten island, dreaming of new places to explore and friends to make. His life takes a sharp turn when the park receives its first visitors in 100 years: a wannabe web celebrity named Rebecca and her talking blue cat-bot, Happy. When an unspeakable tragedy leads the other robots to chase Shiki out of their home, the two travelers decide to introduce Shiki to the outside world, taking him with them on their boat—which suddenly rises from the water and blasts off into space!

So begins the tale of a boy whose name will one day echo across the universe. But the surprises don't stop there, as Shiki is quickly thrust into command of the Edens Zero, an interstellar warship left behind as inheritance by his adoptive grandfather, the mechanical Demon King, who once used it in his search for Mother, the fabled Goddess of the Cosmos. What follows is a galactic adventure filled with cybernetic dragons, space pirates, existentialist androids, temporal anomalies, magical cyborg ninjas, and much more as Shiki vows to fulfill his late grandpa's dream—and to make as many new friends as he can along the way, whether they like it or not!

EDENS ZERO is the third major manga series by Hiro Mashima, coming on the heels of the long-running Fairy Tail's conclusion in July 2017. Described by Mashima as "Space Fantasy" rather than straight Science Fiction, the series is a classic High Fantasy story with a more cosmic edge that continues Mashima's tradition of reimagining select characters and elements from his previous works, namely Fairy Tail and Rave Master, making it a Spiritual Successor of sorts. But while it continues Mashima's traditional themes of True Companions and The Power of Friendship, it's markedly Darker and Edgier than its immediate predecessor, featuring viler antagonists and a greater emphasis on loss, prejudice, and human cruelty.

The manga was launched in Japan's Weekly Shonen Magazine on June 27, 2018. Owing to Mashima's shift from analog to digital drawing, the manga is notable for being the first to ever be translated and published worldwide at the same time as its Japanese release, done in a grand total of six other languages.note English, French, Portuguese, Chinese, Korean, and Thai Mashima has also featured the manga in a short-term Crossover series with Rave Master and Fairy Tail titled Mashima HERO'S, which ran simultaneously with EDENS ZERO and Fairy Tail: 100 Years Quest from October 16 to December 25, 2019.

An Animated Adaptation of the manga by JC Staff began in April 2021, with Netflix acquiring

rights to stream the series internationally in August the same year. Currently, a single season of 25 episodes, covering up through the Sun Jewel arc, has been completed and aired. Production on the anime is slated to continue

; however, director Yūshi Suzuki passed away after completion of the first season

. Still, it was revealed the anime will indeed have a second season.

Lastly it also has not one, but two Action RPG video game

adaptations by Konami in development: a 3D game for consoles, and a top-down game for mobile devices titled EDENSZERO Pocket Galaxy.

The Pain of Losing a Comrade

While mourning the loss of an old crewmate and friend, Witch--in a rare display of emotion--encourages Sister to stop holding her tears back.

Example of:
It's Okay to Cry

The Pain of Losing a Comrade

While mourning the loss of an old crewmate and friend, Witch--in a rare display of emotion--encourages Sister to stop holding her tears back.