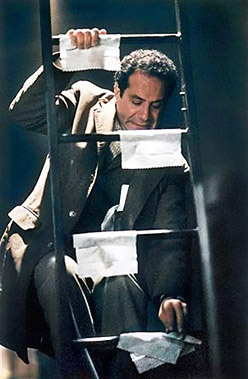 Known to psychologists as "mysophobia" and to others as "germophobia", this trope describes characters who have a crippling fear of germs. This is one of the common symptoms of Super OCD and a phobia that, in fact, more or less affects most people. We are instinctively afraid of all things that are by definition highly contagious (like rotting corpses or waste), and for a good reason; this trope is about someone who lets this fear consume them.

This goes well beyond simple fear. Realistic examples might refuse to touch anything that hasn't been extensively washed, while more over-the-top versions can go so far as to fear the germs are sentient and conspiring to make them sick (though research has shown they can work together

, and may even be capable of messing with your head

). Imagining the germs as Monstrous Germs can increase the phobia.

In more fantastic settings, the fear can actually be justified as the plague may actually be sentient and/or much deadlier than anything we know in real life. It's not an uncommon plot to have a character develop this problem for a short time in order to deliver An Aesop about taking risks being a necessary part of life.

Sheldon refuses to hold hands with anyone out of his fear of germs.

Sheldon refuses to hold hands with anyone out of his fear of germs.