Film / What About Bob? 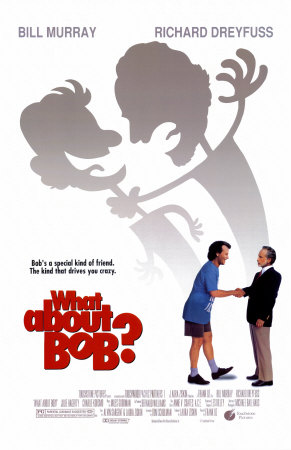 Dr. Leo Marvin (Dreyfuss) is a successful therapist with a best-selling book out and a gig with a morning show scheduled. He's also insufferably smug.

Just before his summer family vacation, he sees a new patient, Bob Wiley (Murray), who has been foisted upon him by a colleague. Bob has multiple issues — he's afraid of death, tight spaces and germs — but he immediately takes a shine to Dr. Marvin. Unfortunately for Bob, Dr. Marvin has a lot planned for his family trip and no intentions of taking work along with him. Unfortunately for Dr. Marvin, Bob is not going to give up that easily.

Bob invites himself to join the Marvins, bringing just his essentials and his goldfish. He has subtle encouragement from the locals, who don't care much for Dr. Marvin and are only too happy to let this lunatic interfere with his peaceful vacation. His own family finds Bob harmless and charming, unaware that their psychologist father is slowly coming unglued...