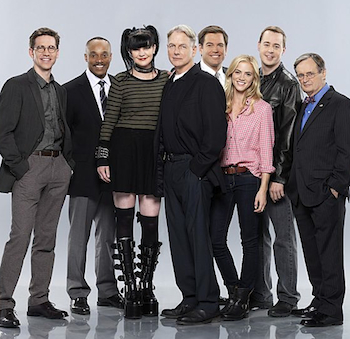 NCIS is an American long-running primetime television series created by Donald P. Bellisario and Don McGill for CBS about Navy criminal investigators. The show is a spinoff of JAG (1995-2005), which in addition to the parent series’ military theme and occasional Spy Drama also leaped on the Forensic Drama bandwagon started by CSI. NCIS stands for "Naval Criminal Investigative Service"; like JAG, it is based on a real organization within the Department of the Navy, and also much less action-packed in real life than the Hollywood-style fictionalized version the show depicts. The organization is the criminal investigative arm of the Navy and Marines, though it is a civilian law enforcement agency, unlike the Army's CID.

NCIS (Navy NCIS for its first season) depicts a team of investigators assigned to deal with criminal activity involving Navy personnel and Marines. That means that the entire gamut of crime—from Serial Killers to fraud to international espionage to Unauthorized Absences—can turn up. This Major Cases Response Team is led by Leroy Jethro Gibbs (played by Mark Harmon), a retired Marine gunnery sergeant who Always Gets His Man, and contains a rather colorful collection of detectives and lab workers.

A classic example of a Sleeper Hit, the show was largely ignored at the beginning of its run, but has considerably gained viewers since then (although it is now on a downwards trend in the U.S.). In 2015, ratings-wise it was the number one scripted show on U.S. network television and the most watched show in the world.

NCIS has been on the air since September 2003]] and, as of September 2021, is in its 19th season, thus far surpassing the already long run of its parent show]] and making it the 7th longest-running scripted American primetime television series in U.S. TV history.

Recent episodes can be viewed free on CBS's site here

Although neither Los Angeles or New Orleans have reached the heights of the parent program, they have both become successes in their own right.note NCIS: Los Angeles and NCIS: New Orleans were the most watched new shows for the 2009-10 and 2014-15 seasons, respectively. Time will tell how well Hawaiʻi does, but it has been renewed for season 2.

Please contribute to the character and recap pages.

McGee asks Nick on what happened back in his UC days during a BATF-NCIS joint op to bring down a gunrunner helping the Mexican drug cartels.

McGee asks Nick on what happened back in his UC days during a BATF-NCIS joint op to bring down a gunrunner helping the Mexican drug cartels.