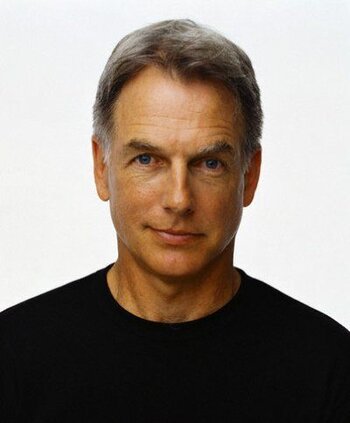 On it, boss!
"It's a lot easier to do good work when you have good words to say and work with good people."
Advertisement:

With an athletic fathernote 1940 Heisman Trophy winner Tom Harmon, who served with distinction as a bomber and fighter pilot in World War II and an actress mother, it's no surprise that he played college football and has found success as one of TV's hunkiest actors. While most of his roles have relied on little more than good looks, Harmon was impressive on St. Elsewhere as Bobby Caldwell, the suave doctor who contracted AIDS.

Harmon is probably best known for starring as Special Agent Jethro Gibbs on NCIS, a role he played for 19 seasons from 2003 to 2021. He continues to serve as an executive producer for the series, something which he also did for its spinoff show NCIS: New Orleans during its seven-year run.

He lives in Los Angeles with his wife Pam Dawber, whom he married in 1987. They have two sons.

And oh, just for the record, he doesn't have any social media as he said he wasn't really into Facebook or Twitter and prefer to keep his personal life private