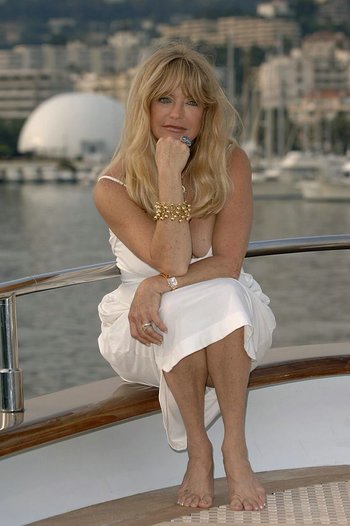 Goldie Jeanne Hawn (born November 21, 1945 in Washington, DC) is an American actress, director, producer, and occasional singer with a shockingly long career across television and movies.

She was born in Washington, D.C., and began taking ballet and tap lessons at the age of three. In 1955 she danced in the corps de ballet of the Ballet Russe de Monte Carlo production of The Nutcracker. Her stage debut was in 1961, when she played Juliet in a production of Romeo and Juliet.

Her acting career began on the short-lived sitcom Good Morning World, but her next role as one of the regular cast members on 1960s sketch comedy show Rowan and Martin's Laugh-In brought her to international attention. Her chipper attitude on this show carried over to her following appearances in Cactus Flower, Theres A Girl In My Soup, and Butterflies Are Free. Her Academy Award for Best Supporting Actress from Cactus Flower proved to be the catapult her film career needed, and a whole pile of movie roles followed, with only a few slow spots in between.

She is the mother of Oliver and Kate Hudson and Wyatt Russell. She has been in a relationship with Kurt Russell since 1983.