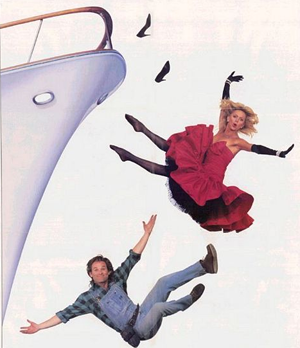 Joanna Stayton (Hawn) is a Rich Bitch living with all the creature comforts on a yacht with her husband Grant (Edward Herrmann). While bored during a stopover for repairs in the small town of Elk Cove, Oregon, Joanna hires a local carpenter, Dean (Russell), to remodel her closet. Despite the closet being exactly what she asked for, she declares it to be sub-par, stiffs him on the bill, and throws him and his tool box overboard.

After leaving port that night, Joanna goes up on deck to retrieve her wedding ring. She falls overboard and washes up near Elk Cove with amnesia. Her husband, although he comes to see her, does not retrieve her, instead taking the yacht for an extended party with younger women. Dean, however, sees Joanna on the news and decides that a little payback is in order: he tells her that her name is Annie and that she is his wife and the mother of his four sons, and plans to have her Work Off the Debt by doing domestic chores.

Unfortunately for him, she has never so much as touched a kitchen or cleaning implement in her life. Hilarity Ensues.

Not to be confused with the newspaper comic strip Overboard. Or the pirate game Overboard!

A Gender Flipped remake starring Anna Faris and Eugenio Derbez was released in 2018.