Film / Everyone Says I Love You 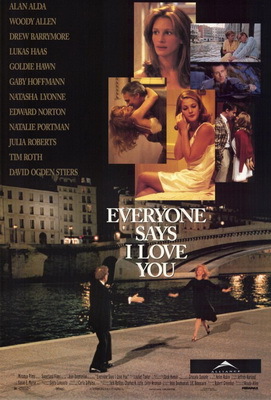 Everyone Says I Love You is a 1996 musical dramedy written and directed by Woody Allen and starring a large Ensemble Cast of actors who aren't known for their singing.

Like a lot of Woody Allen movies, the film is set in New York and features loads of characters. This particular film distinguishes itself by having the characters randomly break into song. The musical numbers, and the entire tone of the film are a Shout-Out to the musicals of the 1920s and 1930s.