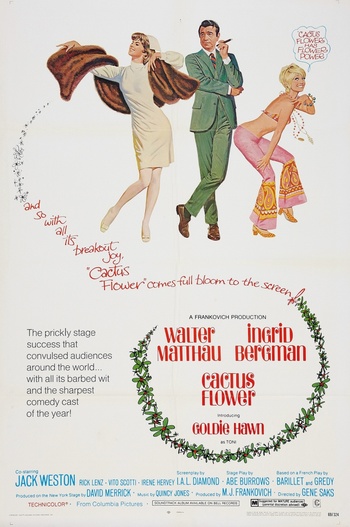 Dr. Julian Winston, D.D.S., has a Park Avenue office that has recently been remodeled with a hi-fi stereo. He's been known to fix the teeth of pretty girls for free. His secretary-assistant, Stephanie Dickinson, who keeps a small cactus plant on her desk, efficiently handles Dr. Winston's needs during his working hours. After hours, he consorts with other women, these days usually with Toni (Antoinette) Simmons, a 21-year-old thing who works at the L.P. Record Shop in Greenwich Village. He does not have a wife and three children, but Toni has lived and loved him for the past year under exactly that impression. He's willing to say anything to Toni to prove he loves her in all honesty, but when he tells Toni he'll get a divorce and marry her and she demands to meet the wife first, he finds himself confronted with a side of Stephanie he never knew in all his years of working with her when he presses her into playing the part of Mrs. Winston.

The play's original New York cast included Lauren Bacall as Stephanie. The 1969 film adaptation, released by Columbia Pictures and directed by Gene Saks, starred Ingrid Bergman and Walter Matthau, with Goldie Hawn making her big-screen debut (and winning an Academy Award) as Toni; the adapted screenplay was by I.A.L. Diamond, a frequent collaborator of Billy Wilder. A 2011 movie remake was titled Just Go with It.