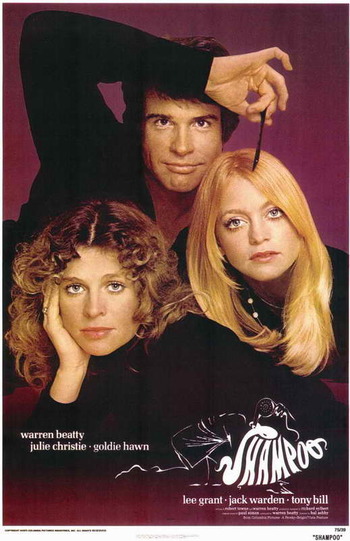 "I go into that shop and they're so great looking, you know. And I, I'm doing their hair, and they feel great, and they smell great. Or I could be out on the street, you know, and I could just stop at a stoplight, or go into an elevator, or I...there's a beautiful girl. I, I, I don't know...I mean, that's it. I, it makes my day. I mean, it makes me feel like I'm gonna live forever. And, as far as I'm concerned, with what I'd like to have done at this point in my life, I know I should have accomplished more. But I've got no regrets...Maybe that means I don't love 'em. Maybe it means I don't love you. I don't know. Nobody's going to tell me I don't like 'em very much."
— George
Advertisement:

On November 4, 1968 — Election Day — George Roundy (Beatty), a Beverly Hills hairdresser, is trying to get enough money so he can open his own shop. He's also trying to juggle the demands of the women in his life, including Jill (Hawn), a model who's his current girlfriend; Felicia (Grant), a rich housewife and one of George's best customers (both in the shop and in bed), who offers to set George up with her tycoon husband Lester (Warden) for the money he needs; and Jackie (Christie), Jill's best friend, Lester's current mistress, and George's ex-girlfriend, whom he's still in love with.