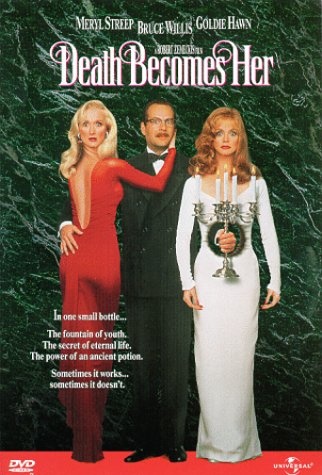 Imagine, for a moment, that one drink of a simple elixir could make you immortal. You would never need to worry about aging or dying; the elixir would make you young and beautiful forever, which would put you in some very good company. This only has one catch: After ten years, you must "disappear" to make sure no one figures out you've become immortal. It's a no-brainer.

But imagine that your biggest romantic rival — the person from whom you might have stolen the love of her life, years ago — has already become immortal, and is trying to steal your man back. Neither of you know about the other's immortality, but both of you want to kill each other.

Well, turns out that maybe it's not a good idea to even try that. Because there was actually another catch. If you don't take good care of your body, you'll have to deal with the consequences for a very long time...

Death Becomes Her, a 1992 comedic Gothic Horror story directed by Robert Zemeckis for Universal Pictures, stars the trio of Goldie Hawn, Meryl Streep, and Bruce Willis as three people trapped in a love triangle that eventually turns murderous — if the people being murdered could actually die, anyway. The film is best known for its special effects, including uses of CGI that were highly ambitious for the early 90's. It won an Academy Award for Best Visual Effects.

Death Becomes Her contains examples of the following tropes:

On being offered eternal life, Ernest has a rather important question.

Example of:
And Then What?

On being offered eternal life, Ernest has a rather important question.