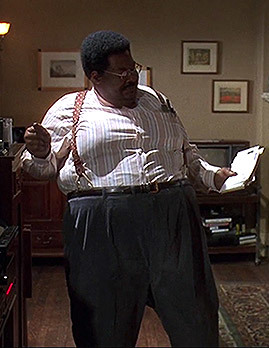 When a major actor receives a role that requires obesity, there are two options: go on a high-calorie diet as Robert De Niro did for Raging Bull and The Untouchables (1987) or Vincent D'Onofrio did for Full Metal Jacket, and go through the effort of losing that weight afterward — or just wear a Fat Suit. Sometimes a role requires the character be overweight for just a brief period in a film, and to gain and lose weight in such a rapid time is impossible.

Fat Suits are sophisticated three-dimensional prosthetic makeup that go far beyond just putting a pillow under one's shirt. It requires painstaking facial makeup to provide realistic jowls and multiple chins, in addition to the suit, which covers the arms, legs, breasts and belly.

Sometimes, a character, who is otherwise supposed to be skinny, athletic, or at least normal-sized, will don a Fat Suit as a plot point, a disguise or just cheap comedy.