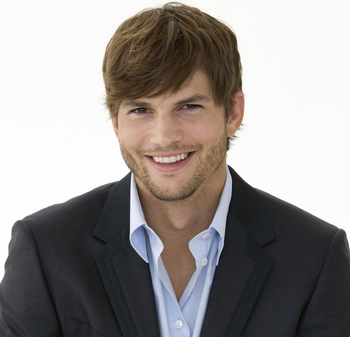 "I'm continually trying to make choices that put me against my own comfort zone. As long as you're uncomfortable, it means you're growing."
Advertisement:

Christopher Ashton Kutcher (born February 7, 1978) is an American actor, investor, producer, and former model. He is known for his portrayal of Michael Kelso in That '70s Show. He also created, produced, and hosted Punk'd and had lead roles in the Hollywood films Jobs, Dude, Where's My Car?, Just Married, The Butterfly Effect, The Guardian, and What Happens in Vegas. Kutcher starred as Walden Schmidt in the last four seasons of Two and a Half Men, after Charlie Sheen's firing from the show in 2011. Between 2016 and 2020, he starred in Netflix original series The Ranch.

Kutcher is married to his former That '70s Show costar Mila Kunis. The couple have two children.