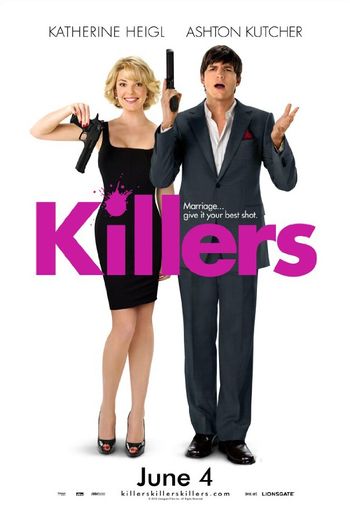 Killers is an American Rom Com directed by Robert Luketic and starring Katherine Heigl and Ashton Kutcher. Kutcher plays Spencer, a professional assassin working for the U.S. government who quits his job after a chance encounter with Jen (Katherine Heigl), with whom he quickly falls in love and whom he eventually marries.
Advertisement:

Three years later, however, his idyllic life is shattered when his old boss Holbrook (Martin Mull) is murdered, and undercover assassins come after him for the $20 million bounty on his head. Unfortunately for him, Jen catches Spencer dealing with one of them. And they're his neighbors. And Jen's just discovered she's pregnant.