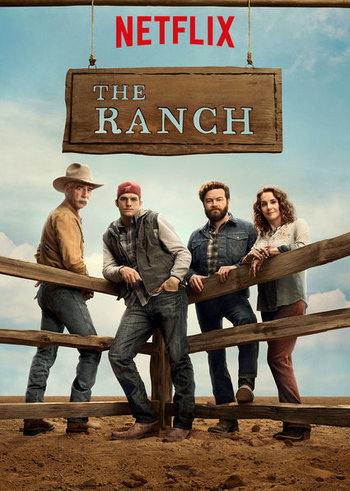 The Ranch is a Netflix original series starring Ashton Kutcher as Colt Bennett, a semi-pro football player who returns to his dad's Colorado ranch when his career goes south. He has to contend with his unambitious brother Jameson "Rooster" Bennett (Danny Masterson), his gruff father Beau Bennett (Sam Elliott), his equally tough mother Maggie (Debra Winger) and re-adjusting to small-town life.

The show uses the traditional, multi-camera sitcom format that was popular in the 1980s and 1990s and is even shot in front of a Studio Audience. But taking advantage of not being on traditional network television, it includes harsh profanity and adult humor.

The show ended up organizing its episodes by "Part" instead of the traditional seasons. The first 10 episodes of Part 1 were released on Netflix April 2016. Part 7 was released September 2019. The eighth and final season was released January 24, 2020.