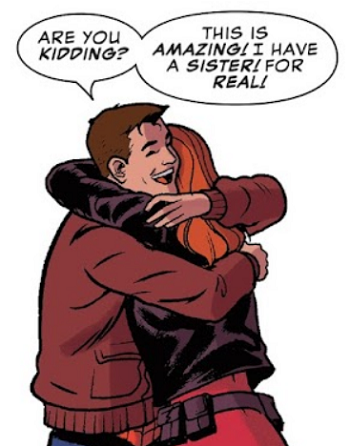 Robin Hood: Did I wrong you in another life, Will Scarlett? Where does this intolerable hatred for me come from?
Will Scarlett: From knowing that... that our father loved you more than me.
Robin: Our father?
Will: We are brothers, Robin of Locksley. I am the son of the woman who replaced your dead mother for a time.
— Robin Hood: Prince of Thieves
Advertisement:

Our hero or heroine meets someone with whom they seem to share a number of traits. The story progresses, and they find themselves working together, at cross-purposes, or drawing together romantically.

And then — The Reveal. The reason our hero has found that other person uncannily familiar or compellingly attractive is that the new person is a Long Lost Relative they may never have known they had, or had believed gone forever. Variations include blood siblings, half-siblings, parents, children, aunts, uncles, cousins once removed, and so forth. This trope is an integral part of the plot in stories where Everyone Is Related.

Often this is hinted before it happens — thanks to Super Powerful Genetics members of the same family usually share a number of trademark traits and habits by which you can easily spot them.

Once reunited, the relatives may form a Brother–Sister Team or join up with the rest of their Badass Family, since blood is Thicker Than Water. Or they may turn out to be a Coattail-Riding Relative instead.

Fair warning. Since this trope involves finding out about long lost relatives, it's rife with spoilers!