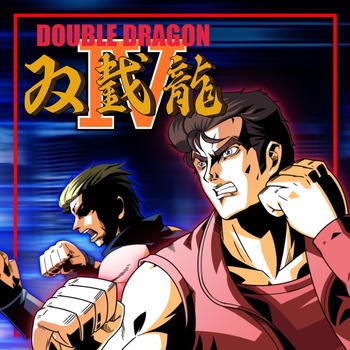 Double Dragon IV is the long-awaited fourth (numbered) installment of the Double Dragon franchise, released for PlayStation 4, PC (via Steam), Nintendo Switch, and iOS in 2017. It was developed by Arc System Works following their acquisition of all the former Technos Japan's franchises. The game was developed by a small team of five people, including director Yoshihisa Kishimoto, character designer Koji Ogata, and composer Kazunaka Yamane, all veterans from the original series.

The game features the graphical style of the NES trilogy (rather than the original arcade games), particularly drawing heavily from Double Dragon II (to which it also serves as a direct follow-up). This time Billy and Jimmy Lee must face against a new gang called the Renegades, who have joined forces with the remnants of the Black Warriors, as the Lees are ambushed during a business trip to expand their dojo to the west coast of the U.S. Behind the Renegades are the mysterious Okada sisters, who wish to lure the Lee brothers to a showdown in Japan.