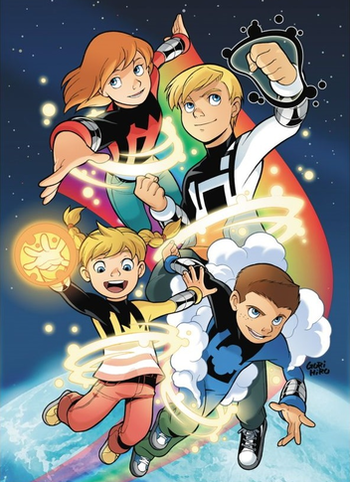 They look pretty badass for a group of little kids. note L — R, top to bottom: Julie Power (Lightspeed), Alex Power (Zero-G), Katie Power (Energizer), and Jack Power (Mass Master)
Power Pack was a 1980s comic book series by Marvel Comics that starred four child superheroes. While this concept is not unusual in Western Animation, it was new for the Marvel Universe. Unlike those of TV cartoon super-kids, most of the Pack's adventures were straight superhero action, with deeper real-world themes as well, such as child abuse, guns in school, bullying, and genocide — the kids were unwilling witnesses to the mass-murder of the sewer-dwelling Morlocks. The mood was lighter than other Marvel fare, but darker than typical super-kid stories.
Advertisement:

The series was about the four children of one Prof. James Power, a scientist who had invented an antimatter generator. However, a horse-like alien named Whitemane tried to warn him that a similar machine had blown up his homeworld. Unfortunately, "Whitey" (as the kids named him) was mortally wounded by his enemies, the alien Snarks, and couldn't prevent them from kidnapping the children's parents.

Dying, Whitey had no choice but to pass on his superpowers to the Power children and hope that they could save the Earth and rescue their parents. With help from Whitey's living spaceship, Friday, they succeeded, and without their parents finding out about their new powers, to boot!

The four of them then decided to keep their powers a secret, and continued to adventure around New York City as the "Power Pack".

The kids, from oldest to youngest, and their (original) powers are:

They would later find out that they could switch their powers around—or even give them all to a single person—as well.

While never a major Marvel series, Power Pack lasted a surprisingly long time and had a loyal following. The series lasted for 62 issues (August, 1984-February, 1991). At one point, Franklin Richards (son of Mr. Fantastic and The Invisible Woman of the Fantastic Four) joined them for a while under the name Tattletale (his godlike powers were at the time reduced to just telepathy, precognitive dreaming, and a ghost body). The Pack met various other heroes, including Spider-Man and Wolverine. Strangely, for a long while few people called them on being superheroes at such a young age (Katie was only five years old!) or going around without adult supervision (unless you count Friday's) much less doing dangerous stuff behind their parents' backs.

Their parents do eventually find out, however, and the family has to deal with it — by going insane and turning into catatonic wrecks. Fortunately for the kids, the New Mutants helped them out by having Gosamyr convince the parents it was all a misunderstanding and their kids were still normal. It's later revealed that the race of space-horses (no, really) who gave the kids their powers created mental blocks to stop their parents ever realizing that the children were superheroes, even if they showed up with a teenage alien runaway and a talking spaceship in tow or something. Which they did.

Although canceled years ago, the Pack characters have resurfaced in other comics such as New Warriors and Runaways (as teenagers). In 2000 the team appeared in a new, four-issue miniseries, again as teenagers. There was an attempt in 2005 to reintroduce the team to regular Marvel continuity in an unashamedly all-ages series of books, but this was later sideways-retconned into an out-of-continuity series, as the writer of Marvel's Runaways comic introduced a version of one of the Pack characters in that book which didn't match up with the all-ages character (namely, Julie as a teenager) — or even the character from their previous appearances in the 2000 miniseries.

Now, it appears as a regular series of mini-series in Marvel's Marvel Adventures imprint and it seems to have found its niche with fun stories complemented with adorable manga-esque art. Alex Power is also a member of Reed Richards's Future Foundation (as seen in the FF book) and is a regular feature of that book's supporting cast.

There was a failed Pilot for a television series version, but it was never aired in the US, though it did appear on overseas channels and has circulated as a bootleg among fans for years. As of now, Marvel's new owner, Walt Disney Pictures, is wondering if this kid team would be an obvious property to develop for a film. Considering they made Big Hero 6, another obscure Marvel superhero team, into a film, there's a chance it could happen.

Making a return in the pages of FF in February 2012 (the issue's title is even "The One Where Power Pack Shows Up"), the first time the whole team's been together in the mainline Marvel Universe in more than a decade (real-world time, at least).

Power Pack would not receive their own comic again until November 1, 2017, as a part of Marvel Legacy. However, this was only a one-shot. 2019's Future Foundation features Alex and Julie on the team and are the de facto protagonists of the series. They received a new miniseries in November 2020 as part of the Outlawed storyline, in which Alex, Julie and Jack were all now teenagers and Katie close to it.

Not to be confused with a type of battery, or with the Matrix in the very poor dub of Transformers: ★Headmasters.