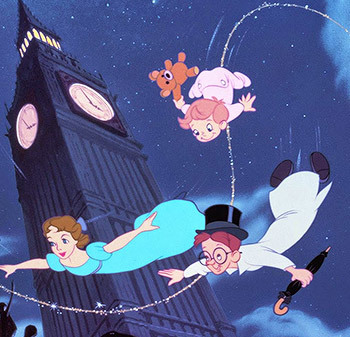 There's nothing more inconvenient than a Call to Adventure in the middle of the night.
"Not bad for a man in his jim-jams. Very Arthur Dent. Now there's a nice man."
— The Tenth Doctor, Doctor Who, "The Christmas Invasion"
Advertisement:

If there's one thing worse than the advancing hordes of evil turning up on your doorstep and forcing you onto a long quest to save the world, it's when it happens before you've even had your coffee. You finally got a chance to catch some sleep, and got rudely awoken by The Call in the middle of the night, telling you to rush out of the house without so much as a chance to get dressed. Or even put on your shoes (though maybe you prefer it).

Some heroes spend virtually their entire adventure wearing nothing but their jimmy-jams. On the plus side, they're comfy and warm, and a stylish dressing-gown can lend a touch of the Badass Longcoat. But you do tend to look a tad ridiculous, and a dressing-gown over a long nightshirt may be confused with Sword and Sandal wear, the Middle Eastern traditional costume descended from it, or wizard robes.

The implications of this may vary. In some cases it may simply mean that the hero was caught off guard and didn't have time to get properly dressed. In others, it may be used as a not-so-subtle indication that none of what's happening is real.

Pajama-clad for one adventure, but usually dressed otherwise