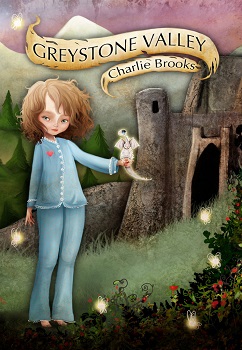 Our heroine and her tiny dragon. And yes, those are pajamas.
Advertisement:

Greystone Valley is a 2013 children's fantasy novel by Charlie Brooks. The story follows the adventures of a plucky 12-year old named Sarah, who finds herself retreating into fantasy literature after the death of her father. After making an errant wish, she finds herself in the titular fantasy world, where she winds up teaming with a nearly illiterate wizard, a homophobic swordsman, and a miniature dragon against a warlord who seeks to conquer multiple worlds. And she has to do all this while still in her pajamas.

A sequel, Conquest of Greystone Valley, was released in 2016.