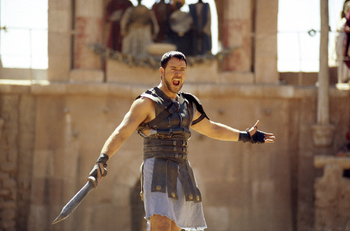 ARE YOU NOT ENTERTAINED!?
"Joey, do you like movies about gladiators?"
— Captain Oveur, Airplane!
Advertisement:

A particular kind of Period Piece set in ancient biblical or mythological times, running the gamut from Heroic Fantasy to Historical Fiction. Movies set in The Roman Republic or The Roman Empire, or even in Ancient Grome, are usually included. Alternatively, it may be used to describe Fantasy Counterpart Culture equivalents in a secondary world.

The subgenre of low-budget Sword And Sandal Italian films of the '50s and '60s is known as Peplum. These films in particular tend to have the World's Strongest Man as the hero (often Hercules, but not necessarily). Much like the spaghetti westerns, peplum tend to star non-Italian, Anglophonic leading actors (if they're actors at all) alongside an Italian supporting cast. They also tend to get wildly different titles when released outside their home country, to the point where entire franchises can be fashioned out of what were originally stand-alone movies.

A classic Cyclic Trope, as Hollywood has regular periods of fascination with the era, and the trope was named by an early period of such films being popular, being a staple of The Golden Age of Hollywood.

Contrast Sword & Sorcery, on which the name is based (or vice versa). Strictly speaking, the two genres are distinguished by Sword & Sorcery having explicitly fantastic settings, typically a pseudo-Medieval European style Constructed World. Conversely, Sword And Sandal at least pretends to depict real-world historical settings, usually being set during classical antiquity in the Mediterranean regions. There is often some overlap though, especially when mythology gets involved, but it is usually existing mythology based directly on Hellenic tradition.

The equivalent would be Wuxia for China, and Jidaigeki for Japan, in somes cases, though these Period Pieces may also include elements of The Middle Ages, or even later ages, that are absent in Sword And Sandal ones.