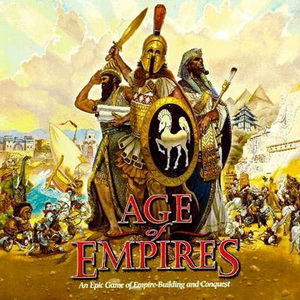 The first game of the Age of Empires series, simply called Age of Empires, was released in 1997. It offered 12 ancient civilizations (Assyria, Babylonia, Choson, Egypt, Greece, Hittites, Minoa, Persia, Phoenicia, Shang, Sumer and Yamato) and was set between the Stone and Iron Ages. The campaigns were set in Ancient Egypt, Ancient Greece, Babylon and Yamato.

An expansion pack, Age of Empires: The Rise of Rome, added the Roman Empire and 4 related civilizations (Rome, Carthage, Palmyra and Macedonia). The campaigns were set in Ancient Rome, where the player, depending on the campaign, will side with Rome itself or with their enemies.

At E3 2017, the Definitive Edition was announced, an Updated Re-release that was released on February 20, 2018. The game received a drastic art style change as well as a reworking of some of its campaigns.

Age of Empires I (and its expansion) features examples of: