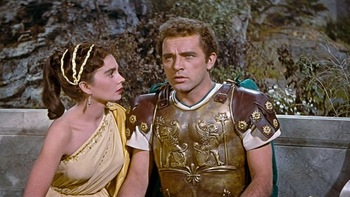 What happened to the Roman soldier who won Christ's robe at the Crucifixion?

That is the origin of the plot of the 1942 novel The Robe by Lloyd C. Douglas, and its 1953 film adaptation directed by Henry Koster and starring Richard Burton, Victor Mature, Jean Simmons, Michael Rennie, and Jay Robinson.

Our Villain Protagonist Marcellus Gallio (Burton) is the soldier who crucified Jesus and won The Robe. Marcellus is driven mad from the touch of the robe, which is then taken away from him by his slave Demetrius (Mature) who has converted to Christianity. Marcellus soon embarks on a quest to recover The Robe and destroy it, believing this will restore his sanity. There's also the matter of his childhood sweetheart Diana (Simmons), who loves him and waits for him in Rome, even though Emperor Caligula himself (Robinson), has taken a fancy for her.

Notable as the first movie released in CinemaScope, which ushered in Hollywood's widescreen era. Alfred Newman composed the music score. Nominated for five Academy Awards, winning for art direction and costume design. Followed a year later by a sequel, Demetrius and the Gladiators, in which both Mature and Robinson reprised their roles.