Film / Hercules and the Captive Women 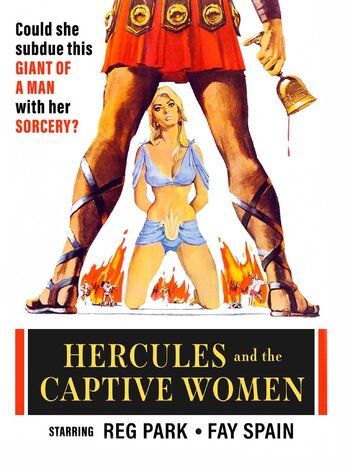 Hercules and the Captive Women (original Italian title: Ercole alla conquista di Atlantide [Hercules and the Conquest of Atlantis]; also known as Hercules Conquers Atlantis and Hercules and the Haunted Women) is a 1961 Sword and Sandal film directed by Vittorio Cottafavi, starring British bodybuilder Reg Park as the titular demigod and Fay Spain as the Evil Queen antagonist.

It is a follow-up to The Revenge of Hercules, and the fourth entry in the film franchise started by Hercules (1958) — which franchise this film is technically a part of (despite the wholesale cast change), as Steve Reeves was expected to continue in the role but decided to drop out after Hercules Unchained; furthermore, this actually is a Hercules movie, not just a Dub Name Change like Hercules Against the Moon Men. note Another Hercules movie, The Loves of Hercules, was produced independently in 1960 mainly as a vehicle for Jayne Mansfield. The plot of the movie also borrows, uncredited, from Pierre Benoit's novel L'Atlantide which had been filmed multiple times. From this novel, the concept of Atlantis under the rule of evil Queen Antinea and her horrible practices was lifted wholesale.

Witness to an ominous vision concerning an imminent attack by an unknown force which threatens all of Greece, Androcles the king of Thebes attempts to organize a "pre-emptive strike" expedition, but the other Grecian nobles refuse to participate; even Hercules declines, choosing instead to retire with his family. Androcles and Herc's son Hylus note "Illo" in the original conspire to trick Herc into the journey anyway, and off they go with a crew of mercenaries and ne'er-do-wells — the only help Androcles could scrounge. Soon, a storm wrecks the ship, leaving Hercules stranded alone on a small island where he finds a girl encased in rock; she is a Human Sacrifice to the demigod Proteus. Herc's having none of that and kills Proteus, freeing the girl who reveals that her home is on the nearby island of Atlantis.

In Atlantis, Hercules reveals to Queen Antinea that he has rescued the girl and "freed" them from the domination of Proteus, then asks for help in locating his missing comrades. Antinea pretends to cooperate, but she has a hidden agenda — the girl is her own daughter, and prophecy states that should the queen's daughter outlive her, Atlantis would be destroyed. (Also, in case you couldn't guess, Atlantis is the source of the threat which got all this started, but they don't dwell on that a whole lot.) Now Hercules has to find a way to rescue the girl (again!), find his missing companions and save Atlantis and the whole of Greece from the bloodthirsty Antinea.

Reg Park would go on to do three more Hercules movies (Hercules In The Haunted World, Hercules Prisoner Of Evil and Hercules The Avenger) and one Maciste movie (Maciste in King Solomon's Mines), as well as mentor another up-and-coming bodybuilder, one Arnold Schwarzenegger, though Arnold only ever played Hercules once.

Hercules and the Captive Tropes: