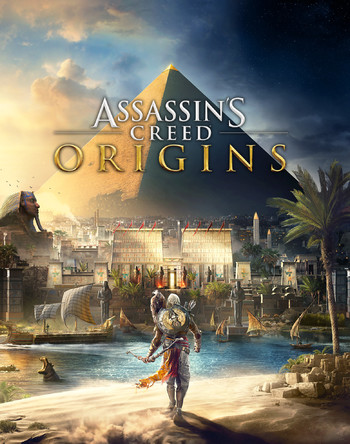 The game is set in Ptolemaic Egypt during the reign of Queen Cleopatra VII Philopator in the year 49 BCE. Your protagonist is Bayek of Siwa, a Medjay, a former member of an elite police force that mysteriously disappeared after the collapse of the New Kingdom. Bayek becomes the founder of the Hidden Ones, a group that would become the Assassin Brotherhood (alongside his wife Aya, a woman from Alexandria serving directly under Cleopatra), while Egypt experiences a turbulent period of civil war and occupation by the Roman Republic. The game includes a huge swathe of land filled with countryside and small settlements, the Nile River Delta, sandy and white deserts, and the cities of Memphis and Alexandria.

Earlier entries to the series had always implied that the Assassin's Brotherhood, which originated as we understand it during The Crusades, was Older Than They Think. Origins is the first entry in the series to actually be set in a Pre-Crusades time period, during the era of Antiquity.

It also has a prequel book, Assassin's Creed: Desert Oath, detailing Bayek becoming a Medjay in 70 BCE. Some of the DLC was free, including "The Trials of the Gods" (timed events that have Assassins fighting Animus-renders of the Egyptian Gods) which was available fifteen days post-launch; a Horde Mode, and most importantly the "Discovery Tour", available early 2018, which is an entirely new mode of the game without any action NPCs and violence, and serve as an entirely educational mode with commentaries by Egyptologists describing the research that went into the games.

The second DLC, The Curse of the Pharaohs goes to Thebes and the Valley of the Kings, featuring a large new landmass. The Hidden Ones hear rumors of a new Isu Relic surfacing in Thebes. Bayek goes to investigate, but things prove more complicated as the city appears to be under a curse causing the old pharaohs buried in the nearby Valley of Kings to rise from the dead and attack the city.

The game was later followed by a prequel, Assassin's Creed: Odyssey, taking place in Ancient Greece during The Peloponnesian War.

"May the Hidden Trope walk beside you. The Lord of the Tropat awaits":

Example of:
Canon Character All Along